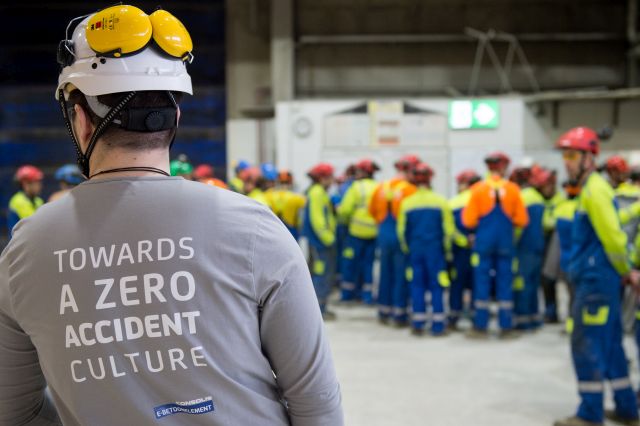 It Pays off to Contribute to Occupational Safety

On Monday, the number 1131 was displayed on the electronic tableau at the gate of the Tamsalu factory of AS E-Betoonelement. Even the players of memory games could not guess the meaning of the figure increasing by one unit per every day.

The employees of the factory did not have to attend to their routine tasks on the same Monday. The day was meant for further education in the field of occupational safety knowledge and skills.

Four workshops were organized at the Tamsalu factory. Tips and tricks in connection with cranes were taught in the first one. Accidents having happened with a hoist and their main reasons were discussed in the second one. In the third workshop, however, the discussion revolved around haemorrhage, the necessity to stop it, and easier binding methods.

A quiz was basically conducted in the fourth workshop. Four groups with about twenty employees in each group had to answer 54 questions, which involved things learned already some time ago as well as new issues introduced on the same safety day. Answering all the questions correctly would have given the maximum score of 63 points. A group led by a planner, Herki Loide, was victorious with 58 points.

The scores are not so important after all. As to the words of Marek Prees, it is more important for people to gain new knowledge at the quiz.

Four groups addressed the issue of safety in the factory, but one was at the Tamsalu community centre acquiring skills and knowledge in connection with work involving an open flame. They received a document permitting them to work with an open flame, for instance.

A high level of work culture was evident at the factory in addition to contributing to the occupational safety. Accuracy—to be more precise. The end of the safety day was planned to be at 14 pm. Exactly at the said time, the head of the factory Marek Prees began his brief speech, thanking the participants and hoping that everyone gained new knowledge that day.