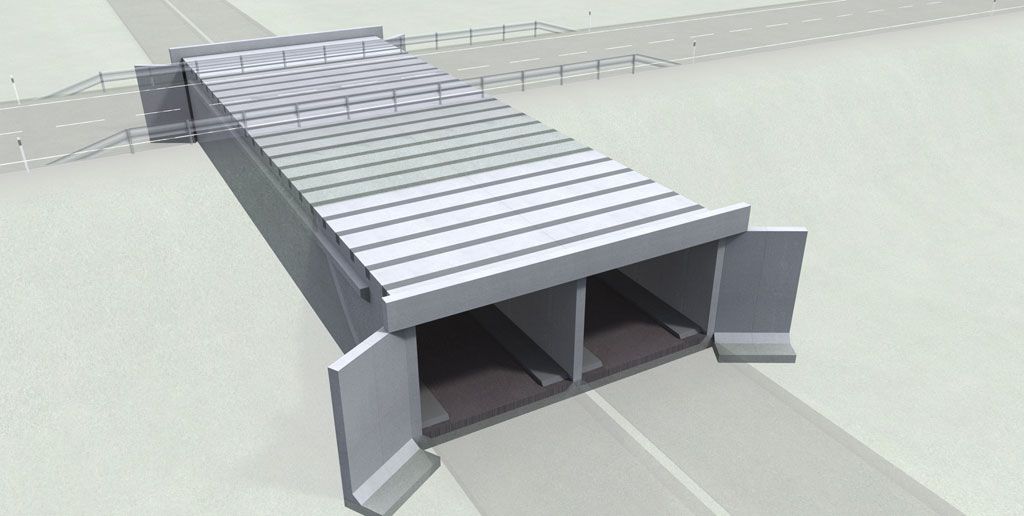 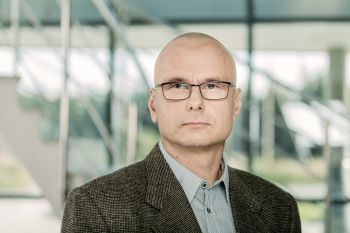 Contact us!
We will make a bid for your project.
We help you find the best solution and advise on various technical issues. 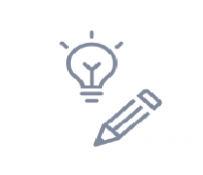 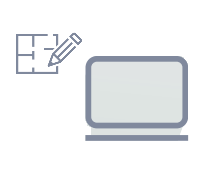 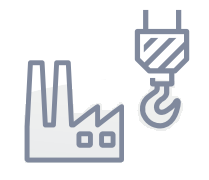 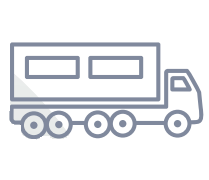 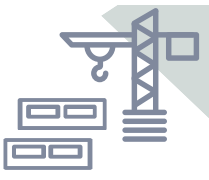 The use of reinforced concrete elements in infrastructure facilities offers several advantages:
- precision and quality of factory work;
- the quality of the factory-made concrete surface;
- several different finishing options;
- Elements can be provided inclination with casting
- Elements can be casting communication utilities at the factory;
- the dependence of the work on the weather has been minimized;
- the speed of work on the site;
- Minimum requirement for formwork at the construction site;
- In parallel with the installation, there is an opportunity for traffic penetration.

E-Betoonelement has been offering and producing solutions for precast concrete bridges since 2000. The first bridge based on ZIP beams, the 33-metre-long Kärkna Bridge, was built the same year on the Tartu-Jägeva highway 6,6km over River Amme. It was followed by the bridges of the Estonian Power Plant, Sirgala, Korbatu and Puurmanni. In 2008 the 160-metre-long Vaida viaduct and the 90-metre-long Aruvalla viaduct were built – these are the longest ZIP beam flyovers in Estonia so far.

The ZIP beam superstructure consists of prestressed ZIP beams which have an inverted T-shape cross-section and are assembled side by side. Beams are connected by a cast-in-situ deck slab and reinforced concrete cross-girders at supports. 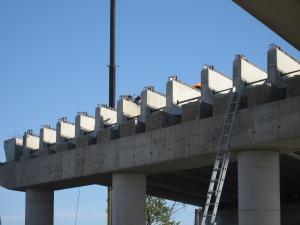 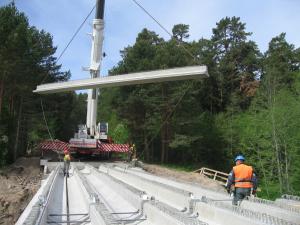 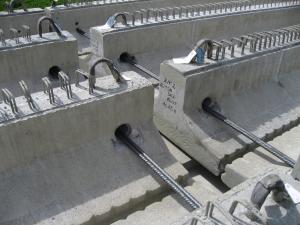 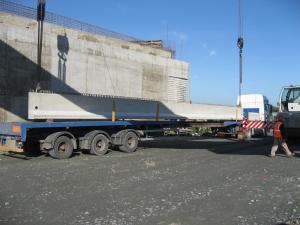 ZIP-beams can also be placed at a longer centre-to-centre distance when there is no need to consider the impact load from below (for example when the clearance exceeds the minimum permitted height or when the bridge crosses a non-navigable river). In this case the deck is created as a composite structure using approximately 70-80mm thick precast concrete slabs as formwork. These precast deck slabs are used to cover the gaps between beams, creating a formwork which supports the load of the cast-in-situ topping and after the monolithic part has hardened they act together carrying traffic loads. 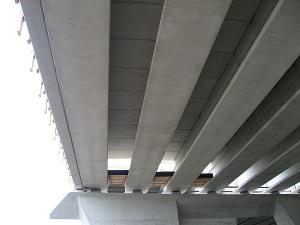 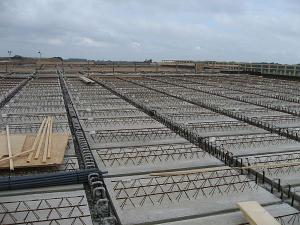 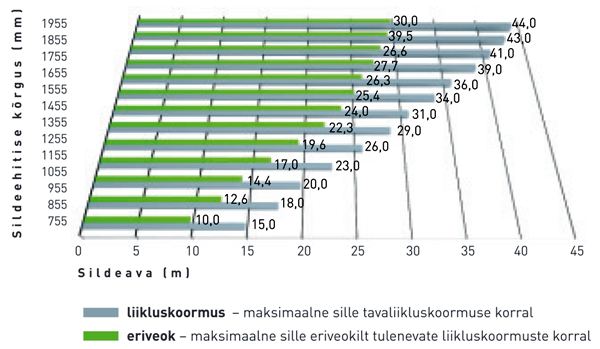 The ViaPlus box beams is a closed cross-sectional bridge beam, which is casted in the factory either in one or two stages depending on the geometry of the beam. To this day, we have found the use of this type of tailgate for trapezoid cutting, to provide a smoother deck for the edges. The first object where we have manufactured such beams is Viaducts No 1 and 2 in Maardu, mid-level crossroads of Kroodi. The ends of the turtle are full cross-section in the close-up zone, but the rest of the length is a gap in the center of the body, separated by stiffnesses of ~ 5m. 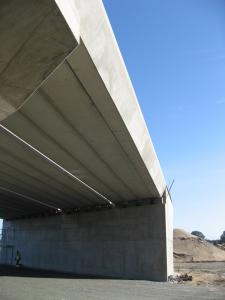 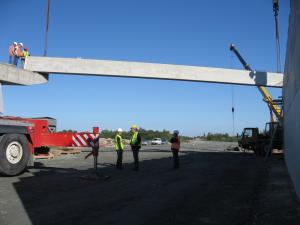 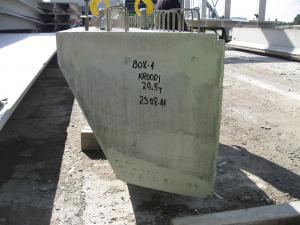 In the Netherlands, the box-beam is a widespread beam, offering a number of options for a bridge deck
–Deck formed by beams is possible further tensioned in the longitudinal and transverse directions
– possible to build continued spans
– greater torsional stiffness
- There is no need for a monolithic over-casting
- Minimum time duration in deck construction

Precast deck plates together with cast-in-situ topping create a composite structure. There are two types of plates depending on whether they are used for constructing a new superstructure or for reconstructing an existing one.

About the solution
When building a new bridge deck, plates are assembled directly on concrete or steel beams. Openings are left in the precast plates for the shear dowels in the beams. Dowel joints and connections between plates are cast together after the assembly of plates. Plates are further joined together by cast-in-situ topping which is approximately 100 mm thick. The lower surface of the precast deck plates is a smooth formwork finishing. The top surface of the element can be cast with initial double-sided transverse slope. When an existing bridge is being reconstructed and the old and usable concrete deck is partially preserved, it is possible to use precast deck plates which are installed on the existing parts. In this case the plates are thinner and lighter. The top side of the plate can then be cast as a mould surface and the lower surface remains a steel floated one. 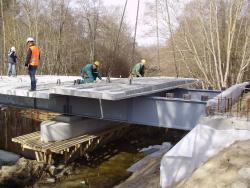 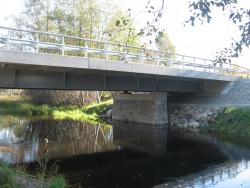 Advantages
- Enables to cast the bridge deck in factory conditions.
- During the casting of bridge deck and the initial hardening period of concrete there are no fluctuations of the outdoor environment (heat, extreme cold, excessive rain or snow).
- During the first week concrete hardens in stable indoor conditions, thereby reducing the risk of cracks.
- There is no need to use formwork on site and it is significantly easier to build a bridge over a water body that has a changing water level or a river-bed with poor load-bearing capacity.
- Safety at construction site improves since the element after assembly becomes immediately a platform for carrying out subsequent works.
- Saves construction time since elements can be cast at the factory while preparations are made at the construction site.
- Concrete surfaces are with high quality and the dimensions of elements are checked and double-checked before they are delivered to the construction site.

Assembly
- Bridge deck plates are assembled.
- There is a groove in the side edges of deck plates which are equipped with sealings at the factory in order to prevent cement paste from seeping through between elements while joints are being cast.
- Horizontal reinforcement is installed in the connections between the slabs.
Dowel joints and connections between the slabs are cast together.
- Border elements are assembled.
- Reinforcement of the in-situ topping is placed and the topping is then cast.
Joints between border elements are finished with elastic mastics.

Border and edge elements for bridges
Precast reinforced concrete border and edge elements can have various cross-sections. The shell elements are usually 3-4 m long but we have also manufactured up to 7.5 m long pieces. These elements can be used for both cast-in-situ and composite decks. Elements are fixed with temporary fastenings during assembly and are later connected to the deck by means of protruding rebars or special steel connections. Joints between elements are finished with elastic mastics. Sleeve anchors with internal threads can be cast in the elements for fastening safety barriers. The top and outer surface of elements can be treated with a suitable impregnating substance. The edge element can have a curved design or various patterns including dummy joints, formliner surface or even graphic concrete.

The tunnel-cross-sectional elements or segments form the supporting structure of the segment tunnel. On the working site, the segments are assembled one after the other and, if necessary, tensioned the tunnel body in a longitudinal direction. On the outside of the segments there are concrete console panels to support the board drive, and it is possible to put into the factory the cable and other accessories at the factory. The inner surfaces of the tunnel are poured into shape and allow the use of different surface finishing techniques. 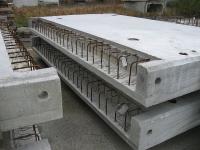 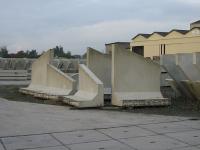 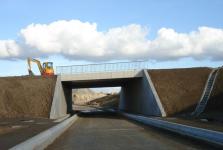 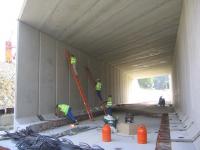 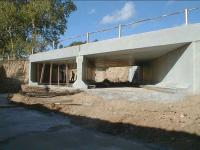 The idea of a beam tunnel is similar to that of a slab tunnel only the load-bearing ceiling elements are in this case prestressed beams (see ZIP beams) which are assembled side by side. There are openings in the beam webs for installing transverse reinforcement. The space between beams is reinforced and filled with concrete. This makes it a full cross-sectional deck structure. This solution is suitable for spans of 10-16 m. Walls can be either L-shaped supporting wall elements or straight wall panels combined with an in-situ floor.

We offer technical design of element solutions and production of precast elements together with delivery and assembly works. We have produced precast concrete elements for passenger platforms with both closed and open structure.

Closed structure
It may consist of L-shaped elements and edge slabs (platforms on the Saue-Riisipere and Keila-Paldiski lines) or steel columns in combination with precast socle panels and edge slabs (Tartu city station).

Edge panels for platforms (with a tactile warning strip)
AS E-Betoonelement produced first tactile stones in 2006 for making warning strips for the visually impaired. These were installed at the Sääse bus stop on Mustamäe road in Tallinn.

When the renovation works on railway passenger platforms started in 2009, the problem of the safe travel of the visually impaired needed a solution. The use of such warning strips is very common in rest of Europe. Since there are no existing standards in Estonia for this, it had to be determined which surface structure is most suitable for the conditions in Estonia. We manufactured several different relief patterns and the representatives of the Estonian Blind Union, the Estonian Technical Surveillance Authority and AS Eesti Raudtee chose the most suitable one. The surface was chosen in wintry and snowy weather and the selected surface was then applied as a standard pattern to all new platforms.

E-Betoonelement’s plant in Rakvere has been producing railway level crossings based on the technology of the Swedish companies Strängbetong and Abetong since 1996. Level crossings are made from concrete which ensures good resistance to cracking and high quality and they have been used on the Estonian, Lithuanian and Russian railways. They are durable in time since connections with the railway are created by means of rubber bearings which prevent concrete from crumbling. Concrete level crossings have low maintenance costs, they are easy to install and are suitable for both train and car traffic.

We offer the production and delivery of marker posts based on a list provided by the Client. Painting the posts is not included in our work. 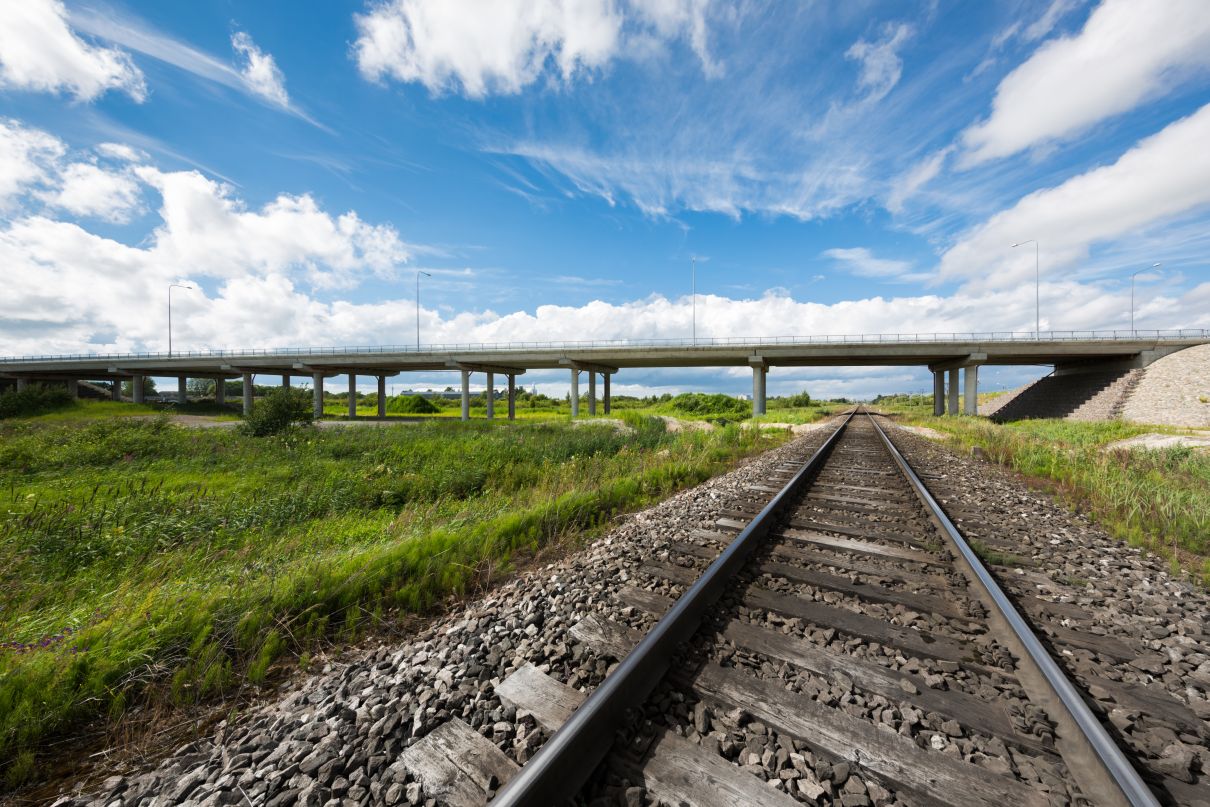 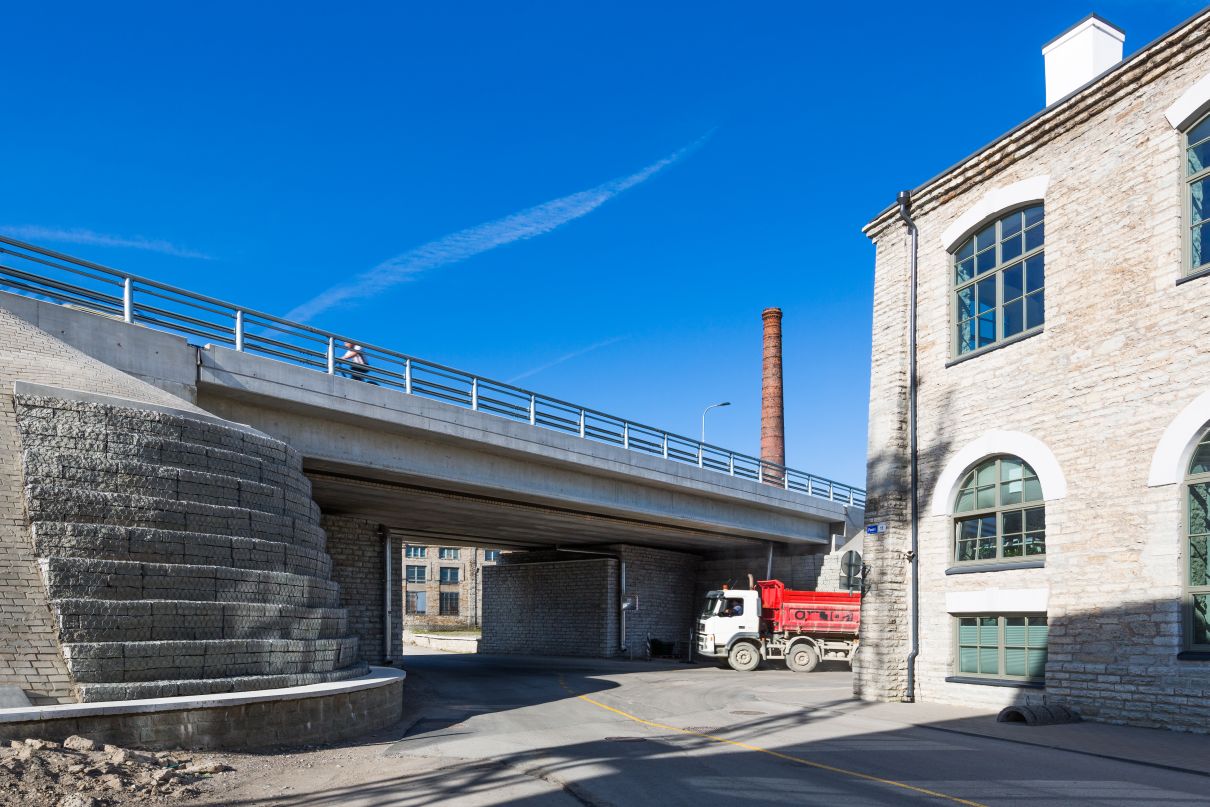