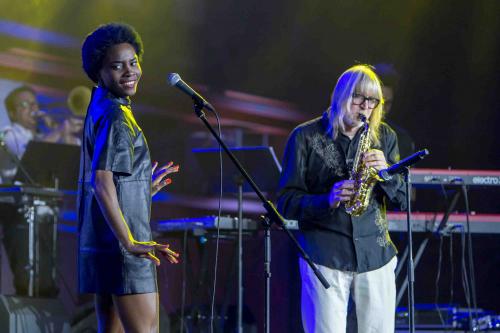 The leading Estonian manufacturer of concrete elements AS E-Betoonelement celebrated its 25th anniversary by bringing the jazz club Wool Moon to life for the invited guests. The main act on Thursday night was the French star Ann-Shirley.

The jazz club Wool Moon that hosted world renowned jazz artists such as Randy Brecker, James Carter, Kurt Elling, Maceo Parker and several other artists who visited Estonia in the 2000s was brought to life for the 25th anniversary of AS E-Betoonelement. The performer this year was the French-Cameroonian singer Ann-Shirley.

The jazz club Wool Moon is as if a legend of a bright city that has sunk to the earth and rises before the people once a year. The recession caused Wool Moon to be forgotten for years, only to reappear before the selected guests even more brightly for the anniversary.

Ann-Shirley started her music and dance studies at the age of 6. The musician trained in classical piano and sound engineering had a turning point in her life when she met the jazz violinist Didier Lockwood, and employing the knowledge she gained while studying at a music school, Ann-Shirley has conquered the stages in France, consistently winning different singing competitions.

“I’d say that the history of our company figuratively reflects the story of how Estonia that had restored its independence was built up,” said Vaido Leosk, chairman of the management board of AS E-Betoonelement. “The idea from back then – to combine the knowledge of element technology from across the border with the vigour of Estonian undertakings and their remarkable desire to create and to develop – has borne fruit. We are a member of the large Consolis Group, which gives us the opportunity to share and to gain knowledge from our sister companies in thirty countries,” Leosk said.

Vaido Leosk, “In terms of Estonia, it is an experienced and mature company, but in terms of the world, a young company that hasn’t had to drastically alter its business model. We are confident that the industrial technology of concrete elements continues to be the best solution on the market.”

AS E-Betoonelement was established in 1992 by three companies – Eesti Ehitus AS, OY Rudus AB, SRV International OY. In 2002, 100% of the company was acquired by Consolis, a group consolidating the leading manufactures of concrete elements in Europe, which has more than 100 years of experience and is represented in 30 countries.

AS E-Betoonelement designs, manufactures and assembles construction solutions based on reinforced concrete elements. Today, 320 people are employed at the two plants of the company in Harku and Tamsalu. The turnover of AS E-Betoonelement in 2016 was 26.4 million euros.