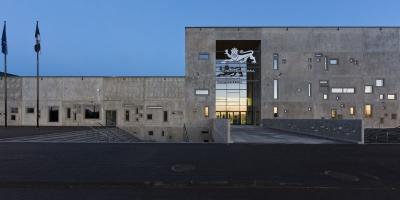 The Estonian Concrete Association today announced the winners of the "Concrete Building 2014" contest at the Tallinn Zoo Center of Environmental Education at today's concrete day.

Concrete building of the year 2014 was announced Tondiraba Ice Hall, which was awarded the main prize to the architectural firm Kadarik Tüür Arhitektid OÜ.
Winning job was smooth, constructive cooperation, resulting in the construction of an architecturally simple, aesthetic, and constructionally complex building where concrete was widely used.
"The aesthetically pleasing, constructionally sophisticated sports hall with multifunctional facilities, which is distinguished from other nordic ice halls with a bigger developmental perspective," the jury noted.
The chairman of the jury, Aadu Kana, noted that concrete was used in a variety of ways for this building, as well as the excellent quality of concrete work and the use of concrete and wooden materials in this building have been particularly successful.

Awards related to Concrete building of the year:

Comment by the jury: "The architects of the building saw even more effective and effective concrete use, but the local builders did not come up with real wishes.

Comment by the jury: "In the 1950s bricks, a concrete parking garage is poured into the factory building, the brick surface is covered with concrete from the inside.

Commentary by the chairman of the jury Aadu Kana: "If the concrete of the three apartment buildings of Kosemetsa does not get out of the way in general, the apartment is extremely concrete-friendly.