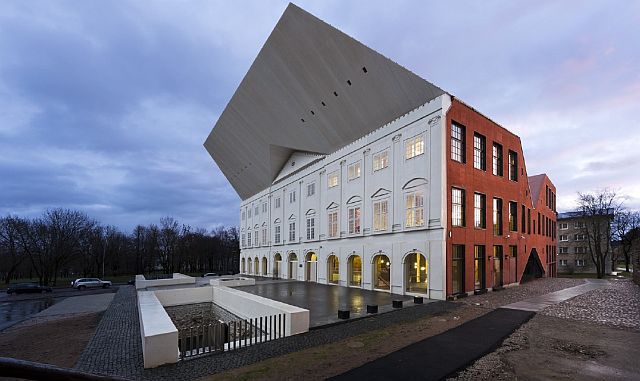 The special prize at the Concrete Building of the Year 2012 for architectural concept was awarded to the University of Tartu Narva College, architects Siiri Vallner, Indrek Peil and Katrin Koov from the architectural bureau Kavakava OÜ. The building's unique façade imitates the baroque façade of a stock exchange building in negative that once stood in the same place.

The jury recognised the project as a building that promotes concrete in the best way. "It is a world-class architectural concept that is cleanly consistent to the end. The entire building is very concrete-based, and the interior also shows off concrete well. It is an excellent example of a building where concrete serves architecture," the jury noted.

The main prize of the Concrete Building of the Year 2012 contest was awarded to constructors Karl Õiger and Heiki Onton for reconstructing the concrete structures of the seaplane hangar at the Tallinn Seaplane Harbour. Prize for the contracting entity - to the Estonian Maritime Museum and prize for the architect - to KOKO Architects: Raivo Kotov, Andrus Kõresaar. Built by Nordecon and concrete was poured by Sika Baltic SIA Estonian branch and Rudus AS

The jury of the Concrete Building of the Year 2012 comprised representatives of Estonian building associations, journalists and Finnish architect Maritta Koivisto.